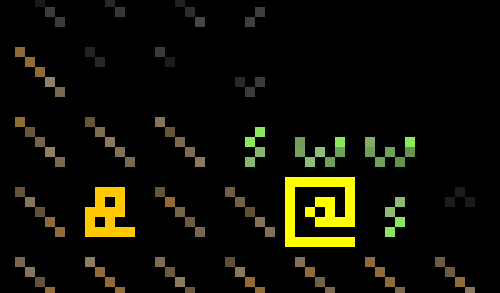 Last week I had said I had a lot of interesting things coming up for the following weeks.

Well I finished all of those this week…

The game has completely transformed how to looks and plays, and it finally feels like an actually game, which is exciting.

So many features have been added, so I will break down each feature to it’s own section.

One thing I wanted to add, but wasn’t sure if I could, is shadows. I thought it would be much more difficult to implement, but it was surprising easy and efficient! I used a technique called ‘Shadow Casting’, which just breaks the tiles around the player into 8 segments and calculates the light for each tile until a solid block is hit. It is very efficient, and once it was implemented, it actually increased my frame rate, due to the time saved in not rendering tiles that are in the shadows.

One cool feature I added with shadows, is what I call “map memory” for lack of a better term. This means that once the player has seen an area of the map, it is remembered by staying rendered, but grayed out. Also, mobs in a remembered area are not seen or remembered, so that the player cannot watch a mob without being in sight of it.

The graphical user interface for this game is something I feared would be difficult, but I couldn’t be more wrong! The UI was very easy to add, it uses almost an identical rendering method as tiles. The UI is made from reading in a text file of what it should be, simple as that. And in the future, if I have to, I can have it read in an image file to pull colors from.

Combat was one of the scary things I had on the list. I was not sure I could make the combat system work how I wanted it until it was finished, and even now I hope it will work.

The combat is inspired by the spell casting system in a game called Legend of Grimrock. It uses a 3×3 set of symbols, or runes, that cast a spell depending on which runes were selected. The UI shown above features the runes the player can select with their numpad numbers. When the player has selected the runes they want to cast, they press the cast button, which right now is 0 on the numpad, and select a direction to fire it in. It then attempts to cast the spell the player selected. If no spell can be found using those runes, a dud is cast, which just creates a bunch of gray particles, signifying smoke or something similar.

There is one more thing I may add to the combat system to prevent players from just spamming a simple spell instead of using more complex ones, which would be the “Charging system”. The player would cast the spell as they would now, except when choosing a direction, they would hold down the direction for a longer time, to “charge” the spell, before firing it. This, in theory, should limit spamming weak spells for a result better than using complex spells. I will be working on this this following week, and it should be done by the next blog update.

I love particles. I don’t know what it is that makes me love making and playing with them, but my most favorite part of Java2D game dev has been the particles and particle effects. That being said, I added particles. They are self explanatory, they are just little dots of color that spread in a random fashion. The interesting part is the rendering types I added for particles, which add some really cool effects. Particles can be rendered as a sprite, which is what you most likely expected them to be, and it just renders the particle where it is with it’s color. The next type is a Lighting particle, which makes a particle only render if it is over a sprite, replacing the pixel of the sprite with the particles color, an example of this can be see in the blood particles in the screenshot below, the blood is only rendered if it is on top of the a sprite. The last type of rendering for a particle is additive rendering. This is similar to the lighting rendering, however, it does not replace the color, instead it blends it’s color and the color of the sprite it is over. The blood actually does use additive rendering instead of lighting rendering.

Projectiles were added to the game, there’s not much else to say, they are exactly what you expect.

Mobs, previously, had only been shown with a single character. This week I added support for mobs that used multiple characters.  Unfortunately, the current search algorithm will not work as it is now with these large mobs, but I had to change the algorithm anyway to increase performance. Not sure when I will get to fixing or rewriting it.