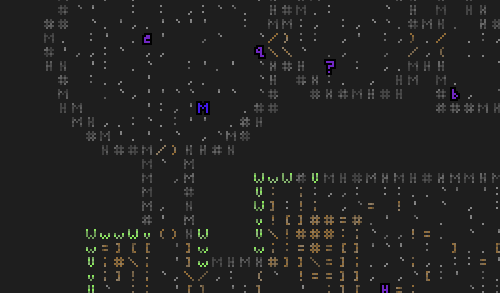 This week Monolith took a big leap forward! One thing that is critical to all roguelikes has been properly added, and it looks pretty nice, so without further ado…

I completely redid the level generation this week, and put some time to make it really special. The basic idea of picking a random size and trying to fit the room stayed mostly the same, but now there a ton of more option for each room, but before I get into specifics, here is what a basic 100×100 level looks like now…

As you can see, this is not your father’s dungeon.

So the way this method creates a unique style to the level is that each room has a different type, and the chance of each type appearing on a given level is controlled by the Level type, which is chosen at random based on how high of a chance it has to be chosen.

On top of just picking a random number for width and height, certain rooms use a type of random number called ‘Perlin Noise’, an example can be seen below:

There are 6 level types:

The rooms they contain will become fairly obvious as I tell you the room types.

So that’s the level generation, it really adds a nice feel to the game, giving the player a bit more curiosity of what each room contains other than another bunch of baddies to battle… speaking of which…

I added an outline effect to Monolith, meaning that when added, adds a border of whatever color and size the method is passed. I added it to give enemies an outline to make them appear more obvious to the player.

This, however, is not applied to the player. I didn’t like how that looked, so limited the outline to just enemies.

Monolith now has the option to toggle fullscreen by pressing F11 at any time. Unfortunately for the time being only the main display is supported for fullscreen (an error is thrown when trying to turn on fullscreen with the window in a different display).

I added a fun little visual effect, that will render the game with a certain palette that can be set to any colors. It works by finding the difference from the pixel’s color and every color in the palette, and replacing the pixel with the color with the lowest difference (meaning it chooses the most mathematically similar color). The game runs really slow with this effect on (A lot of calculating must go into each pixel in the window, and there are a lot of pixels in the window)

I tried a few palettes, here’s a few examples of the game with different palettes:

Gray-scale and a deep red

That’s all for this week! The game definitely feels a lot more like a game thanks to the new level generation. Thanks for reading!

March 12, 2016 - 2:27 am
Very short dev blog this week, because most of the work done has been prep work for next week’s update, and there...
© Copyright Proxima Wordpress Theme By ThemeGoods All Right Reserved.